Metal Gear Solid V is a mixed bag of a game.

It has excellent, polished gameplay, offset by cut content and erratic storytelling. But that does not prevent the finale to this iconic video game saga from moments of heart-wrenching storytelling brilliance.

The theme of the game is in the title, ‘phantom pain’. The sensation of feeling something you have lost. The experience of living after trauma and the scars that you bear as a result.

This is represented physically in the loss of Snake’s arm, but goes so much deeper in the storytelling than that.

The game starts in Ground Zeroes with a rescue mission. You have to save a child soldier, Chico, and an enemy spy, Paz, from a US military base situated on Cuba, which is a representation of Guantanamo Bay in all but name. 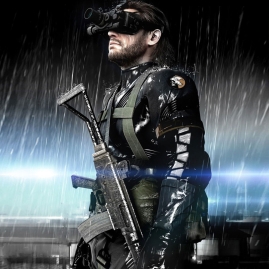 If you have played Metal Gear Solid: Peace Walker this opening is particularly impactful. These are two characters that were an uplifting and friendly presence throughout the game, as you built up Militares Sans Frontiers, and your Mother Base. Right up to Paz’s heel turn at the end of the game they are friends, and even then Paz seems forced into her betrayal, wanting to spend just one more day with the new family she has found.

Snake goes in to rescue them, and finds them horribly broken and abused, victims of sexual violence and torturous surgical procedures. It is the darkest Metal Gear Solid has ever been and it is deeply upsetting and uncomfortable to see, bringing a jarring level of grittiness to always slightly wacky Metal Gear continuity.

You manage to rescue both and exfiltrate the black ops site, ready to return home. But then the real horror sets in. Paz has a bomb stitched inside her and the support team and Big Boss have to perform emergency surgery to remove the bomb whilst still in transit. No anesthesia, no antiseptic, just blood and pain.

The bomb is removed successfully, but what awaits the rescue team on their return is nothing but further horror. They come back to Mother Base, the base you the player built in previous games, to find it under attack and burning. A surprise assault, and everyone was caught off guard. Everything you built is being destroyed. As you try to escape the onslaught, Paz awakens from her pain-induced stupor. ‘There is another bomb!’ In a panic she gets up and runs to the helicopter door. ‘Somewhere, you wouldn’t look,’ she says darkly, as she jumps out of the helicopter to save you, but it is too late. Paz explodes a few feet out of the helicopter, sending it and you crashing into the sea.

You awake 9 years later, in a hospital. Your face and body are scarred, a piece of bone-shrapnel is protruding from your head; it was embedded in part of your brain and could not safely be removed. Hundreds of pieces of bone and tooth shrapnel were removed from your body, but it was not safe to remove the pieces near your brain or your heart. Your arm is missing. The representation of the horror you just experienced.

But that is not the end.

You establish a new Mother Base, a new company, the Diamond Dogs, a new life. But the ghosts do not fade. As you explore your new Mother Base you come across an unexpected surprise. Paz is sat in a hospital bed in the Medical Wing. She is happy to see you and apparently has no recollection of the trauma she experienced. “She is experiencing some kind of dissociative disorder” your right-hand man announces as he stands next to you, she can’t seem to remember anything about what happened and seems trapped in her schoolgirl persona.

Suddenly you remember! The bomb was found! She said there was another and the medic managed to remove it in time. The helicopter crashed when it was attacked by a missile launch, not because of Paz exploding, which must have been some incorrect memory, or nightmare.

But she is clearly not well and is suffering from some kind of amnesia. You need to collect photos from old Mother Base staff to show her, to remind her who is really is and what happened.

The collection of photos seems to bring back recollections but it does not sit well with Paz, leading her to feel increasingly sick and nauseous. And then it happens. You walk into her hospital room one day to see her facing away from you. Blood pooling on the floor beneath her. She turns around to face you and you see with horror she has cut open her belly and is digging through her own intestines as she cries out about there being another bomb inside her. You try to stop her. She is safe. You got the other bomb. And then she pulls it out. The second bomb. Suddenly you are back on the helicopter crying out for her as she jumps from the vehicle only to explode in mid-air. You awaken outside the medical ward to find it still under construction.

She never survived. You never had the conversations with your right-hand man about her. You are suffering from the dissociative disorder. You can hear her voice as she tells you she died long ago, and you need to learn to live with that. She is gone and she cannot be brought back, no matter who you kill or what you do.

The game’s twist ending is that you are not Big Boss. You are the medic from the helicopter, you missed the second bomb and your brain invented a world where you never made that mistake, where Paz didn’t die.

In your comatose state you underwent hypnotherapy and cosmetic surgery to be a body double for Big Boss, and as the hypnotherapy wears off you remember everything.

In my life, I have had two experiences that resulted in emotional trauma, which impacted how I perceived the reality of the world around me, and both occurred within a relatively short period of time.

The first was the death of my Grandmother. It was sudden and unexpected, and I was close to her. For months after her death I would dream that she was alive and everything was normal, and these dreams would feel like memories. Being at her house it felt like she was just in another room. The reality that she is gone is one that feels more unreal than the belief that I might see her at any moment. I have had to consciously remind myself that she is dead many times, as my brain tries to hide that painful fact from me.

The second was the birth of my child. I was nervous about the dangers of childbirth, but after some perinatal classes, my fears were more settled. On the evening that my wife was in labour everything was progressing well, until it wasn’t. Unexpectedly my child turned its head and suddenly the doctors needed to rush us to the theatre. I have never felt such an acute sense of the possibility that I could lose the people I love the most dearly in my life, and that there was nothing I could do to help. I was stood there, forced to watch and unable to help as all my horrors seemed to be realised. Thankfully they were not. My wife and child were fine, but the emotional damage was present.

Sometime after the birth we were all home, when I went to go get a drink when I saw a water bottle we had used at the hospital. Suddenly I was back in that hospital theatre, panic and fear flooding my body. I had a panic attack. It felt completely real. I was back there again.

The way that Metal Gear Solid V explores the mental health of Punished (or Venom) Snake, is deep and impactful. It is hard to describe the experience of living with emotional trauma, but the final entry in the Metal Gear saga does it well.

Snake is not the only one left with emotional scars. He struggles with hallucinations and damaged memories, whilst his comrade Miller experiences a massive personality shift, driven by anger and rage, he loses the charming, cheery approach to leadership that he brought in Peace Walker.

In a similar way we all experience trauma differently. It can be hard to look at the pain you have experienced and find a way to process it. But sometimes naming something and experiencing something by proxy can help the process of healing. For me, playing The Phantom Pain has been part of that process. Seeing someone give words and pictures and sound to my experience, has helped me find catharsis.

Blood for the Blood God! I just finished this awesome Chaos Space Marine, it's been awesome getting back into mini-painting!
Current WIP - a #dnd pet, the Owlcat!
Beautiful snow in London!
It's pretty rough and ready but here is a sugar filled victoria sponge I made for my wife!
Trying to understand how lighting illustrates the features of the human body without colour or "outlines"
Just some #anatomy studies. It's funny how we perceive the spine to be more flexible than it actually is.
I'm feeling the Force this Friday...
Loving the cherry blossoms which bring a splash of colour to these quarantine days.
Turns out playdoh is a surprisingly versatile modeling medium! .